This holiday season, the focus seems to be on the “r” word. No, not recession—retail. Despite concerns about economic uncertainty, the National Retail Federation reports that an estimated 166.3 million people will shop from Thanksgiving Day through Cyber Monday this year. That’s almost eight million more than last year.

Don’t add to your Christmas list just yet, though. Shoppers should be prepared to pay more this year as inflation continues to impact prices. The boost is reflected in PNC’s 39th annual Christmas Price Index, or CPI, which is up a whopping 10.5% from 2021, the third highest year-over-year increase in the index’s history. 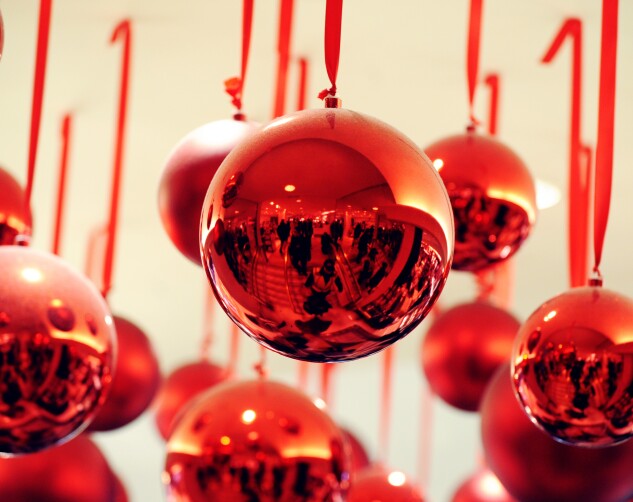 Shoppers are reflected in Christmas balls that hang from the ceiling in Macy’s in New York City on Dec. 16, 2009.

The CPI is an annual tradition that measures the cost of buying the gifts given in the classic holiday song “The Twelve Days of Christmas.” It was initially developed to include a holiday message to clients, but now it highlights market changes over time and is calculated using a method similar to the government’s consumer price index—also called CPI.

The government’s CPI measures the cost of goods and services for consumers in urban areas—the cost of living. Each month, the U.S. Bureau of Labor Statistics reports on the CPI. It’s the most widely used measure of inflation because, as prices go up, the purchasing power of your dollar goes down.

Even if you’re not aware of the CPI, it affects your tax picture: Since 1985, the CPI has been used to make mandatory annual adjustments to certain tax items, like the standard deduction amounts.

And since 2018, the IRS figures those cost-of-living adjustments using a “chained” CPI. The chained CPI measures consumer responses to higher prices rather than merely measuring the higher prices. In other words, if the price of some goods increases, the expected response is to alter your spending to compensate for increases rather than simply spending more.

Here’s how that works: Let’s say that a plate of waffles costs $5 while a plate of pancakes costs $7, and each weekday I choose to eat pancakes, opting for waffles on the weekend, spending $45 per week. Now, let’s say that the cost of pancakes doubled to $14 while waffles only crept up by a dollar, and in response, I flipped the pattern, eating waffles during the week and splurging on pancakes during the weekend.

In contrast, a “chained” CPI calculation would reflect the actual change in my behavior and look like this: ($8 x 5) + ($14 x 2)/$45, or 1.5 times as much. That’s considered by many to be a more accurate capture of spending power.

This year, the sharp upturn in prices reflects what taxpayers are already seeing in stores—inflation. That’s the increase in the costs of goods and services. Over the past year, PNC notes, the Federal Reserve has aggressively raised interest rates to try and beat back inflation.

Amanda Agati, executive vice president and chief investment officer for PNC Asset Management Group, says, “Markets continue to focus on two critical variables for the path forward: signs of inflation peaking and rolling over, and the Fed completing its tightening of financial conditions. In the absence of confirmation on both, we think the high volatility regime is going to continue to dominate and markets are likely to stay pretty choppy.”

Inflation, as it translates into higher salaries, can bump taxpayers into higher brackets, resulting in the dreaded “bracket creep.” In response, the IRS makes inflation adjustments for certain tax provisions every year—there are more than 60 such moves for the 2023 tax year.

For example, the standard deduction for married couples filing jointly will increase to $27,700 in 2023, up $1,800 from the current tax year. Single taxpayers and married individuals filing separately will see a boost to $13,850 next year, up $900, and heads of household will benefit from a $20,800 standard deduction, an increase of $1,400.

Those adjustments present planning opportunities for taxpayers. You can stash more pre-tax dollars in your flexible savings accounts in 2023 and put more in your retirement accounts. The contribution limit for your 401(k), 403(b), and most 457 plans will increase to $22,500. And the limit on annual contributions to an IRA will be $6,500 in 2023, up from $6,000. The IRA catch‑up contribution limit for individuals aged 50 and over is not subject to an annual cost‑of‑living adjustment and remains $1,000.

You can read more about how rising inflation may translate to your tax bill in 2023 here.

But don’t count your turtledoves before they’ve hatched. Extra tax savings won’t necessarily translate to cash in hand—and you may need it this holiday season. “True Loves will need to come up with a record $45,523.27 to buy those 12 perfect gifts this year,” says Agati. “Despite True Loves’ generous intentions, the gifts that make up the PNC CPI are not well-insulated from what is being experienced across the broader economy.”

What’s at the top of the price lists this year? Gold rings. With inflation a worry, some investors dashed for store-of-value assets—meaning those that are typically stable and will not lose value through depreciation—like gold. As a result, the price of gold rings increased faster than any other items on the list—up 39% from 2021.

Also more expensive this year? Turtle doves, which increased by 33.3% over 2021. They were followed by the pear tree—fertilizer prices fed cost boosts of 28.4%. 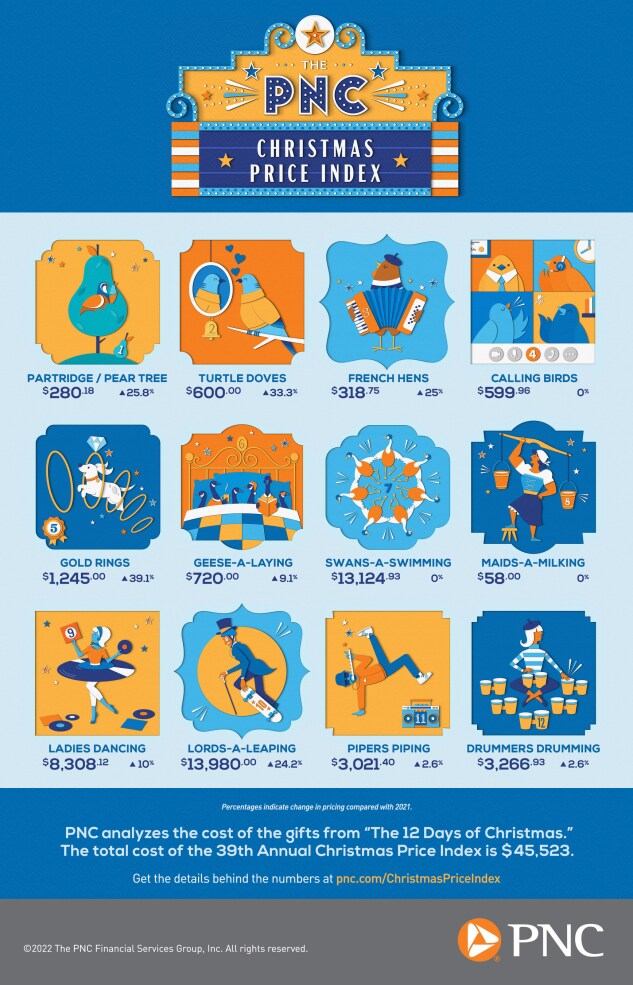 Rising US wages and labor costs in some sectors impacted prices on the list, too. The cost of services at 14.5% increased faster than the cost of goods at 4.2% in the PNC CPI—not unlike in real life. Specifically, the price of ladies dancing increased by 10%, while the lords-a-leaping rose by 24.2%. The 11 pipers and 12 drummers tipped up just 2.6% each. Overall, the costs for performers increased by 14.6%.

But not all wage earners saw an increase. The federal minimum wage has not increased since July 2009, which means that the maids-a-milking haven’t seen a bigger paycheck in more than a decade.

If you’re content to stay at home, you can buy the items online, but it won’t save any money. Purchasing all 12 gifts over the internet will cost $49,663.73, an increase of 8.9%. One of the most significant contributors to online shopping expenses this year? Shipping—there’s no free shipping on birds.

True Cost of the 12 Days of Christmas

If you want to make a statement this Christmas—albeit a noisy, feathery one—you can buy all of the gifts on the list. The “True Cost of Christmas” represents the total cost of items included in all of the song’s verses. Those 364 gifts will cost you $197,071.09, almost 10% more than last year.

The True Meaning of CPI

Assuming you’re not prepared to buy everything on the list just yet, you can still walk away with some lessons. According to Agati, “Like the index, consumer behavior is the drumbeat for the U.S. economy.” As Agati notes, 70% of the US GDP is tied to consumption, making consumer financial health key to future market performance. Understanding holiday spending can help you better understand those economic indicators.

This is a regular column from Kelly Phillips Erb, the Taxgirl. Erb offers commentary on the latest in tax news, tax law, and tax policy. Look for Erb’s column every week from Bloomberg Tax and follow her on Twitter at @taxgirl.

Does Influencer Marketing Really Pay Off?

With Pickme, your neighbor can receive your packages for you • TechCrunch

MercadoLibre Stock Is Firing on All Cylinders. Can Its Success Continue?

Holidays 2022: How to make online shopping a little greener

8 Ways To Maintain Work-Life Balance And Avoid The ‘Holidaze’