A Melbourne marketing agency owner has aired his frustrations over an influencer who cancelled a photoshoot worth $30,000 over a “headache”.

“So we’re on set, we’ve got everyone ready to go, all she had to do was basically rock up﻿…film as much content as humanly possible within 6 hours, then you bounce,” he explained.

Marshall said all the videographers, photographers were present and the studio was all set up, only for the unnamed influencer to call one hour before and say, “Oh I can’t come in Zane, I’m sick, we’re gonna have to cancel the shoot.”

READ MORE: All the best deals from Amazon’s Black Friday sale as they drop

Marshall said he was concerned, thinking, “It must be pretty big to cancel a shoot this big.

But to his disbelief, she said “Oh I’m OK, I’ve just got a bit of a headache, so I’m just gonna call it.”

﻿”But it just goes to show how much money these girls are making if they’re willing to cancel a $30,000 shoot because they’ve got a headache… I’m livid.”

Commenters were divided over Marshall’s video, with many sympathising with the influencer.﻿

READ MORE: Why Harry and Meghan won’t spend Christmas with the royals

“As a person with chronic migraines a slight headache under those lights for 6 hours would leave me in a blackout room for 4 days with a migraine,” said one.

“‘All she had to do was rock up… film as much content as humanly possible within 6 hours.’ Oh so like nothing then,” another commented sarcastically.

“She probably has another reason that she’s not comfortable revealing to you. If it’s 30k, there’s likely a good reason,” added another.

READ MORE: The most unforgettable moments from the ARIAs 2022

“Headaches can be debilitating. Sick days are for people to take when they are sick regardless of how inconvenient it is for you,” said one commenter.

But some could not see her logic.﻿

“I’ve suffered from chronic migraines all my life and there is no migraine bad enough for me not to power through for $30k,” said one commenter.

“Charge her for everyone’s time,” another insisted.

Marshall doubled down on his stance in a follow-up video, where he says he discovered that the influencer in question was actually suffering from a hangover.

READ MORE: The best Black Friday tech deals you should know about

“I know I sounded insensitive in my precious video,” Marshall began, before going into the circumstances behind the cancellation.

“Turns out, she went out the night before (and) got absolutely smashed. She was in another state so she missed her flight in. Her management tried to book her another flight (but) she missed that flight because she was too sick, so they ended up cancelling the shoot﻿.”

He also clarifies that the shoots “are not slave labour”, and explains in another video that there’s a “huge negotiation process” leading up to the shoot, including the influencers, managers, agencies, lawyers, and more to ensure there are “no surprises” going into the shoot.

“When I said that we shoot as much content as humanly possible, what I basically mean is we try to get as much footage as we can for the client with the influencer in that short window…but it’s not six hours straight,” he clarified.

﻿He insists that given the high-energy nature a photoshoot entails, the talent is given adequate breaks every 20-30 minutes to re-energize.

Marshall also shared in a comment that all the money was returned and everyone got paid for the cancelled shoot.

For a daily dose of 9Honey, subscribe to our newsletter here. 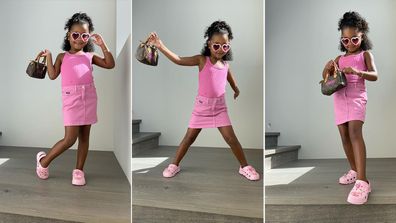 The richest kids in the world

Millionaires tax is a big change for Massachusetts. What happens now?

Black Friday vs. Cyber Monday: Which Sale Should You Shop in 2022?