Online videos are both ubiquitous — only a couple of taps away on your smartphone — and hard to resist. That goes not just for consumers but also for the companies that want to sell to them. The upshot is that more advertising money is moving into online videos — and TV, film and entertainment incumbents are scrambling to get a piece of the action.

According to technology research firm Omdia, the Big Four tech companies — Alphabet, Amazon, Meta and Apple — will this year gobble up 68 per cent of the nearly $500bn in revenue that companies, excluding those in China, are expected to generate from online advertising.

Online video marketing is the fastest-growing segment in the booming world of digital advertising, and Omdia estimates that more money will be spent on video-based campaigns than on those attached to text-based articles or search results by 2025.

“But now they are small compared to companies like YouTube and Facebook [and] the most significant part of this story is how huge [the respective parent companies] Google and Meta have become in comparison with the big TV brands.”

The four giants of the internet are known for their so-called walled gardens of data — their expansive yet enclosed ecosystems of often free-to-use services. These enable them to build unique profiles of users’ lifestyles and habits, which they can sell to advertisers.

Their dominance in this space has only been strengthened by the recent pivot to more privacy-friendly policies from both regulators and corporate peers. Such moves include the EU’s General Data Protection Regulation (GDPR) and the rollback of cookies — data packets that enable advertisers and others to track users across websites — on browsers including Apple’s Safari and Google’s Chrome.

A striking illustration of advertisers’ former reliance on cookies comes from Facebook itself, which in July said it was still in the “early” stages of figuring out how to counteract Apple’s privacy changes, which since last year have cost Facebook more than $10bn in lost revenue.

“We are already in the midst of a cookie-less world now,” says Kelly Barrett, senior vice-president of product management at analytics company comScore, adding that she is advising clients to amass so-called first-party data without delay.

“So authentication, for example — ‘Hey, before we show you this content, mind if you tell us a little about who you are?’ — and when they come to the website a second time, you already know who they are,” Barrett explains.

The next tech growth markets in online advertising

India Omdia expects that advertising revenue linked to online searches and video will nearly double between 2022 and 2026.

US Convergence of traditional TV and online video advertising is a key trend in what is still the world’s largest advertising market.

China The country has the world’s fastest-growing online advertising market, despite a slowdown last year caused by tighter regulation.

Argentina With what is predicted to be the fastest-growing advertising market in Latin America, Argentina is attracting interest from growth-hungry US companies.

In the US, the world’s largest advertising market, traditional media companies are now investing heavily in building closer relationships with their customers, Barrett says — a transition that smaller players in particular need to manage well.

Masalskis warns that “online and TV companies are now competing for the same ad dollars”, with Facebook now making more money from video-based advertising than any broadcaster does — evidence of the value of first-party data when it comes to marketing.

She notes, however, that Facebook and YouTube are facing stiff competition from fast-growing video platform TikTok. Last month Facebook parent Meta reported a third-quarter fall in revenue, while YouTube announced a decline in advertising revenue. Omdia predicts that, by 2027, TikTok’s advertising revenue will exceed that of Meta and YouTube combined.

“[And] it’s not like the broadcasters are sitting on their hands and doing nothing,” Masalskis adds. Broadcasters such as Disney, NBC and the UK’s ITV have scrambled to launch both streaming sites and ad-buying platforms that make it easier for small and medium-sized businesses to reach their viewers.

Planet V, ITV’s advertising hub launched in 2020, tries to compete with Google and Facebook by targeting the smaller businesses that make up a big chunk of new advertisers, and which have traditionally been drawn to the large tech platforms.

“This means smaller businesses can now buy ads easily on ITV, without having to meet with a sales representative,” says Matthew Bailey, an analyst at Omdia. 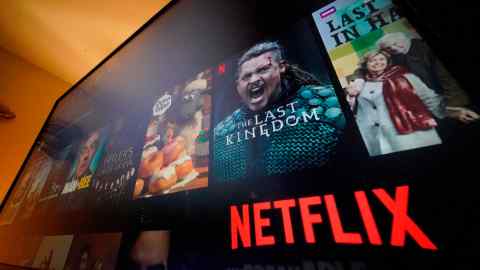 But the key to making it in online advertising is still to build a large, enclosed ecosystem. Disney, for example, amasses data about its customers as they move between its streaming services, resorts and cruises. “They have a lot of information about their users, so they are in a strong position,” Masalskis says.

Bill Stratton, head of media entertainment and advertising at adtech firm Snowflake, says the traditional broadcasters still have leverage — in the form of good old creativity.

“Say HBO and Disney, they have Emmys, Academy Awards and strong [intellectual property] — that’s very attractive to customers and advertisers,” he says.

Snowflake, which was founded a decade ago and counts Disney and NBCUniversal among its clients, has in recent years started operating so-called data clean rooms, a type of adtech platform that has boomed since the phaseout of cookies began. They allow a company to upload its first-party data and have it matched with data from other sources, enabling better consumer targeting in a way the industry deems privacy-compliant.

According to Stratton, the new system is better for advertisers. “The problem with cookies was, you were always losing the signal, because the user would clear their cache,” he says. “First-party data is more permanent.”

Global Food Packaging Market to Touch Valuation of $468.18 Billion by 2028