This week, though, Twitter was seeing a new type of trolling behavior targeting brands using blue check marks, which were on sale as one of Musk’s moneymaking ideas. Musk wanted to “democratize” the ability for anyone to get verified on Twitter by charging $8 a month as part of a premium subscription. But then accounts with blue checks, and with profile names similar to brands, started deceptively tweeting. One blue check under a profile name “Nintendo of America” tweeted an image of Mario giving the finger. Another blue check with the handle “@pepico” tweeted: Coke is better. Notice the handle was not from @PepsiCo, the official Pepsi account.

Musk was clearly aware that selling blue check marks could lead to brand fakers, since it was one of the topics he raised in a Twitter Spaces meeting on Wednesday. During the online talk hosted by Musk, which eventually drew more than 1 million listeners, he discussed his vision for Twitter and his plans to accommodate advertisers. 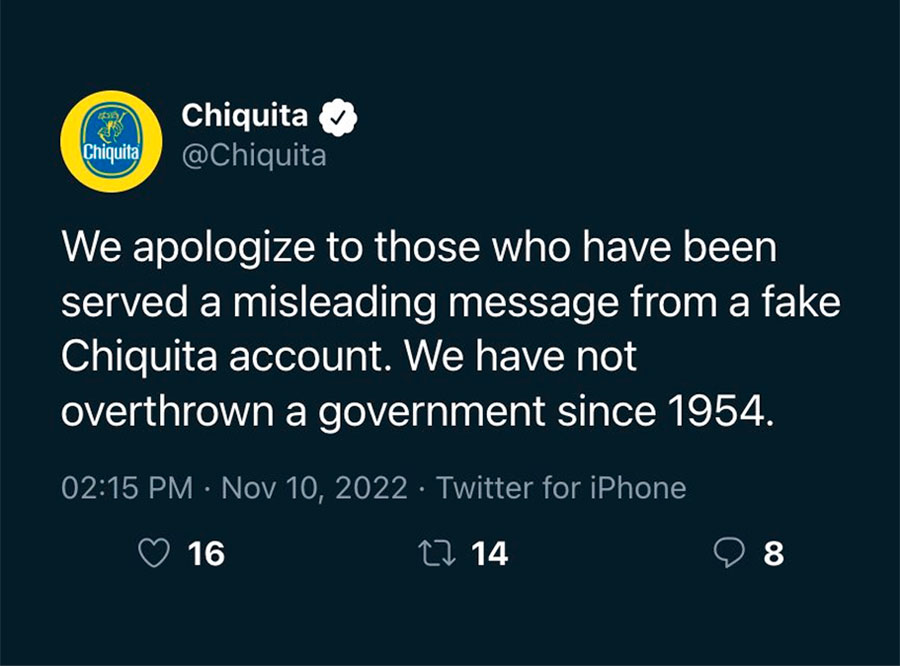 “We’re going to be extremely vigorous about eliminating deception, so if someone tries to impersonate a brand, that account will be suspended,” Musk said on the audio call, “and we’ll keep their $8, and they can keep doing that, and we’ll just keep their $8 again, and keep their $8 again. Great, do it all day long. They will stop … it starts to get expensive, and it starts to need a lot of credit cards and a lot of phones, and eventually they will stop trying.”

Well, the impersonators did not stop before Musk backtracked on the policy of selling blue checks. By late Thursday, Twitter put a pause on allowing anyone to purchase a blue check mark, and Twitter re-implemented another verification tool that Musk rejected once already—the “official” tag that could accompany certain verified accounts. On Friday, more brands were appearing with an “official” tag, below the blue check mark, to denote that those accounts were in fact the actual brands on Twitter.

Most of the impersonations were harmless, but they did target major brands. In one case, a fake account for pharmaceutical company Eli Lilly tweeted: “We are excited to announce insulin is free now.” That received hundreds of retweets and thousands of likes, prompting the real Eli Lilly to apologize for the misleading tweet from a “fake” account.

Salford land back on market after deal falls through

Redundancies at Cummins&Partners as it looks ahead to 2023

Get 75% off annual subscription to Gene’s Page247