As the year draws to a close, it’s safe to say that investors won’t look back at 2022 fondly. All three major U.S. market indexes are deep in the red, the economy isn’t great, and geopolitical tensions persist. But some corporations have defied the odds and delivered solid returns this year.

Biotech giants Regeneron Pharmaceuticals (REGN -0.90%) and Gilead Sciences (GILD -0.94%) are among them. Both drugmakers are riding a wave of positive developments, making them great investment options to consider this month. Let’s dig a bit deeper. 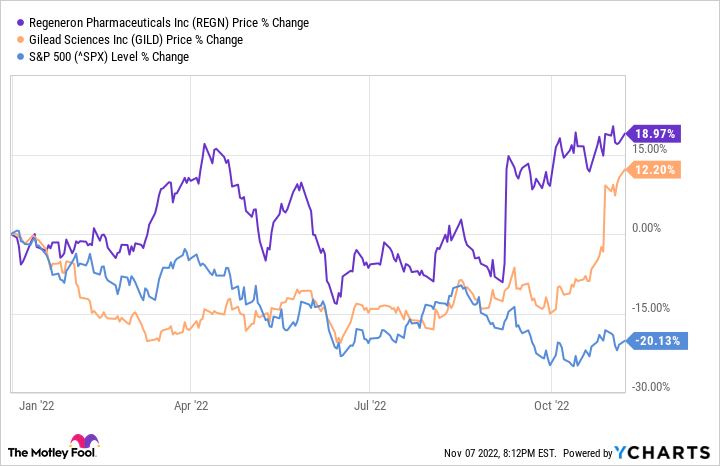 Regeneron is staring down the barrel of a potential patent expiration for one of its biggest cash cows: eye disorder medicine Eylea, the rights to which it shares with Bayer. Eylea could lose patent protection as early as next year. The biotech is facing another issue. Sales of its coronavirus antibody cocktail, Regen-COV, have dropped off a cliff as regulators in the U.S. have severely restricted its use.

Why is Regeneron beating the market this year despite these issues? On the COVID front, demand for vaccines and drugs for the disease will decrease substantially starting next year; Regen-COV was never likely to be part of Regeneron’s long-term plan. And concerning Eylea, the company recently reported positive results from a phase 3 study for a high-dose formulation of the therapy, which could help the company extend its patent protection.

Meanwhile, Regeneron’s other crown jewel, eczema treatment Dupixent, is performing well. Regeneron shares the rights to Dupixent with Sanofi. Furthermore, outside of its coronavirus medicine, the biotech’s top line continues to grow. In the third quarter, the company’s revenue decreased by 15% year over year to $2.94 billion. Regeneron’s non-coronavirus lineup saw its sales jump by 11% year over year.

Regeneron plans to submit an application for a high-dose formulation of Eylea by the end of 2022. And next year, once coronavirus-related dynamics subside somewhat, the company’s revenue growth should increase. These developments are just ahead for the company and could serve as catalysts to boost its stock price. Investors should consider buying the biotech’s shares in advance.

But there’s more. Regeneron will likely earn plenty of new approvals and label expansions thanks to its rich pipeline. The company is running 10 late-stage clinical trials, and many more in phases 1 or 2. Even a handful of regulatory wins could meaningfully impact Regeneron’s revenue — just one more reason why this biotech stock looks like a buy.

Gilead Sciences’ situation somewhat resembles that of Regeneron. The company’s COVID-19 medicine, Veklury (remdesivir), has been an important asset in the fight against the disease since the early days of the pandemic. But now, Veklury’s sales are decreasing, affecting the company’s total revenue; in the third quarter, revenue came in at $7 billion, or 5% lower than the year-ago period. However, Gilead’s revenue minus Veklury increased by 11% year over year.

Investors should be pleased by the company’s third-quarter results since its HIV business — by far its most important — is slowly but surely recovering. Patient starts on HIV regimens had dropped in the past couple of years due to the pandemic, but management is now reporting that “the [HIV] market growth we are seeing suggests that activity has returned to pre-COVID trends.” Also, although Gilead lost patent exclusivity for two HIV medicines — Truvada and Atripla — in 2020, the effect of these patent cliffs is affecting the company’s sales less and less.

In the third quarter, the company’s HIV business reported sales of $4.5 billion, 7% higher than the year-ago period. It was led by Biktarvy, one of the leading HIV drugs worldwide, whose sales for the quarter jumped by 22% year over year to $2.8 billion. Biktarvy ended the quarter with a 45% share of the HIV drug market in the U.S., 4% higher than Q3 of 2021.

Gilead Sciences is awaiting a decision from the U.S. Food and Drug Administration for lenacapavir, a potential six-month regimen for some HIV patients. The FDA initially declined to approve lenacapavir because of manufacturing issues, but Gilead talked things out with regulators and resubmitted an application for the medicine. The company expects an answer by Dec. 27.

Lenacapavir earned approval in Europe in August as Sunlenca. Given that it would be the first six-month HIV therapy, its approval in the U.S. could meaningfully affect Gilead’a stock price, and of course, its revenue down the road.

Gilead Sciences is also making progress in other therapeutic areas, most notably oncology. The company’s oncology sales in the third quarter soared by 79% year over year to $578 million. That was largely due to Trodelvy, which was first approved in 2020; Gilead will be seeking label expansions for the drug. And the company’s overall pipeline, which features dozens of programs, is another major reason to purchase its shares.

Lastly, Gilead is a top dividend stock with an above-average yield of 3.63%, and has raised its payouts by 40% in the past five years. The company’s solid business and secure dividend could work wonders for investors in the current environment and beyond.

There are many reasons to be optimistic about the market, even with the China…

A tale of two stock markets: how London still trumps Paris for investors | The Mighty…

Run-up in energy stocks not over, Citi says in raising BP, Conoco, Repsol to Buy…

Get a Doorbuster Deal on This Stock Education Platform

Dow Jones Futures: Market Rally Strong, But Here’s Why You Should Be Cautious