What’s the point of saving for old age if you’re punished for doing so, asks BARONESS ROS ALTMANN


This is the economics of the madhouse. Downing Street‘s reported plan to extend the freeze on the lifetime allowance for retirement funds could undermine the whole thrust of the pensions system.

It represents a stealth tax on middle income savers. By refusing to increase the maximum limit on pension funds for at least five years, until 2027, Prime Minister Rishi Sunak and Chancellor Jeremy Hunt could force an estimated two million more people to pay tax penalties of up to 55 per cent on pension withdrawals.

That is appalling. It goes against the whole incentive for putting money aside to invest for the long term in a pension fund.

Ministers have also discussed reducing the level of income tax relief on pensions for Britain’s 5.5million higher-rate taxpayers, from 40p to 20p. Again, this could prove a huge disincentive to saving and amounts to an income raid on any workers earning more than £50,270.

I accept that having a simple annual limit on how much can be invested into a tax-favoured pension makes sense, so that the very highest earners cannot abuse the system and avoid tax.

But it’s crazy to then punish people for making smart investments over the decades and building up a comfortable nest egg. 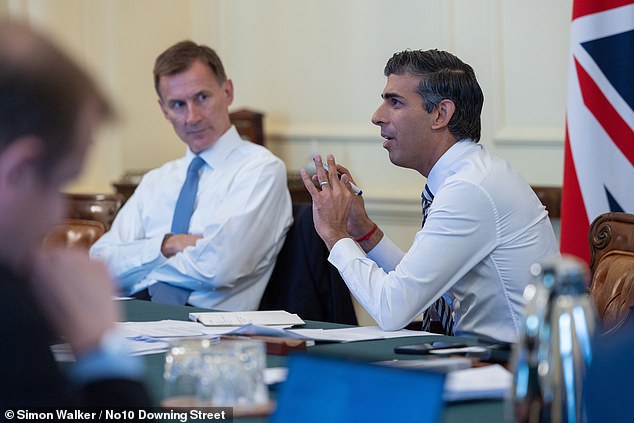 By refusing to increase the maximum limit on pension funds for at least five years, until 2027, Prime Minister Rishi Sunak and Chancellor Jeremy Hunt (pictured) could force an estimated two million more people to pay tax penalties of up to 55 per cent on pension withdrawals

The upper limit on lifetime allowances used to be £1.8million. This was reduced again and again, to £1.5million and then £1.2million and finally supposed to be frozen at around £1million, before the Treasury announced it would rise in line with inflation. But this hasn’t happened.

The last announcement was that it would be frozen again for a couple of years while the latest rumours suggest it will be frozen for even longer.

With the consumer price index currently over 10 per cent, an inflation link would increase the limit by roughly £100,000 this year, but instead its value is whittling away. Every year the limit is frozen, it is falling in real terms.

It’s been a policy worthy of the Grand Old Duke of York, but certainly not worthy of encouraging successful pension investing.

The solution ought to be simple. By setting up a pension fund early in their careers, people can make steady payments and see their funds increase over time.

But what’s the point of encouraging that if, after all those years, people find they are punished for doing well. The penal tax rates are an active disincentive to sensible saving.

BY ARCHIE MITCHELL AND MARTIN BECKFORD FOR THE DAILY MAIL

Jeremy Hunt is to outline spending cuts of up to £35billion in next week’s crucial Autumn Statement – and is also weighing up a £10billion tax raid that would hit the middle classes, it emerged last night.

The Chancellor is understood to have devised proposals for the huge cutbacks after further discussions with Prime Minister Rishi Sunak on Saturday.

He is also planning to push through £25billion of tax rises in order to fill a budget black hole now estimated at a staggering £60billion.

Mr Hunt is due to submit the main outline of his plans to the Office for Budget Responsibility by this morning. He had hoped for a 50/50 split between cuts and tax rises but it is understood that last week’s dire Bank of England warning of a long recession means tax revenue will be lower than previously expected. 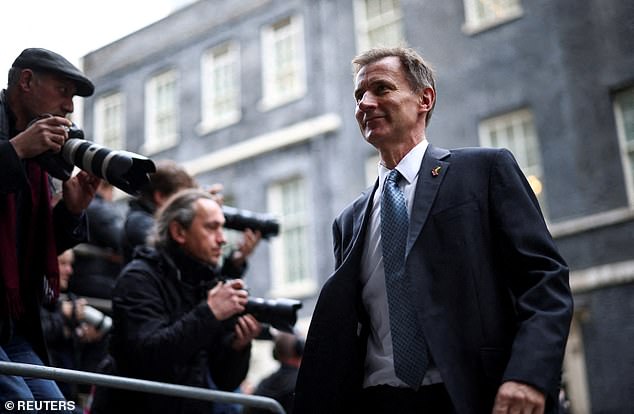 ‘But of course, as Conservatives – and I know that the Prime Minister and the Chancellor share this view with me –we need to bear down on spending first and eliminate waste, excessive spending and only go to tax rises if it’s the last resort.

‘But given the difficulties in the public finances, there is likely to be a mix of the two.’

Middle class workers also face a £10billion hit as the Chancellor considers a tax raid on pension contributions. Mr Hunt is believed to be weighing up a change to tax rules that encourage workers to contribute to their pension pots. The Government could reduce the rate at which income tax relief is applied to 5.5million higher-rate taxpayers, from 40p to as low as 20p. This would raise between £8billion and £10billion each year.

But it would come at the expense of workers earning more than £50,270 per year, who receive a tax break of 40 per cent on their pension contributions. Pension tax relief currently costs the Government £42.7billion each year. 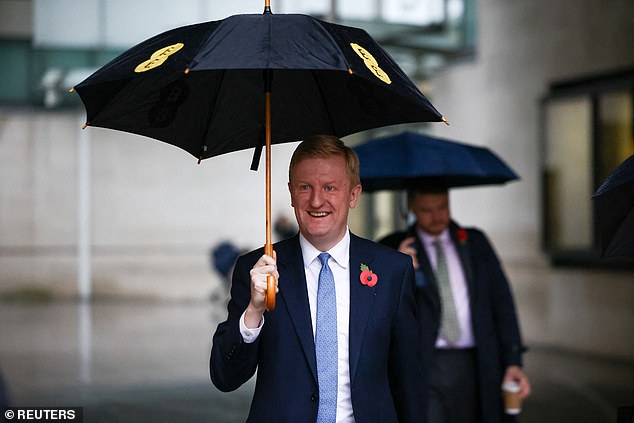 A Treasury source told The Sunday Telegraph income tax relief on pensions ‘has been discussed’ and is still on the table.

A similar plan in 2016 by then-Chancellor George Osborne was abandoned amid warnings it would cause a ‘riot’ in the Conservative Party.

He added that if ministers wanted to alienate Conservative voters, then to ‘abolish the higher-rate tax reliefs and scrap the triple lock and you are pretty much done’.

Downing Street is also reportedly looking at extending the freeze on the lifetime allowance for retirement funds for at least five years. But critics say that a refusal to increase the maximum limit on pension funds could force an estimated two million more people to pay tax penalties of up to 55 per cent on pension withdrawals.

Read More: What’s the point of saving for old age if you’re punished for doing so, asks BARONESS ROS ALTMANN

InTheKnow: What is the Consumer Credit Act?

That’s How Much Millennials Will Need To Live Comfortably

What to do now to protect your retirement plan