US Dollar’s Suffers Biggest Drop 7 Years, Is That the Start of Something?

The Federal Reserve managed to extend the market’s anxiety rather than offer the relief many were expecting after various peers throttled back on their inflation fight. While Chairman Powell and other Fed members speaking soon after the fourth 75 basis point (bp) rate hike was announced were making the effort to throttle back expectations for further ‘front loading’ of monetary policy – big rate hike in other words – the warning that a longer regime of tightening would take its place was quick to follow. Whether or not that is an improvement in course or not for risk trends remains to be seen, but the seasonality may be a market force that shores up the bias for bullish drift. Notably, this past week, the S&P 500 (my preferred, imperfect measure of convenient ‘risk’ update) ended with a Friday rally following four days’ slide. That said, the overall week rendered a slide that reversed from the midpoint of the August to October bear leg. I don’t see enough here to suggest conviction is solidifying among the speculative rank. 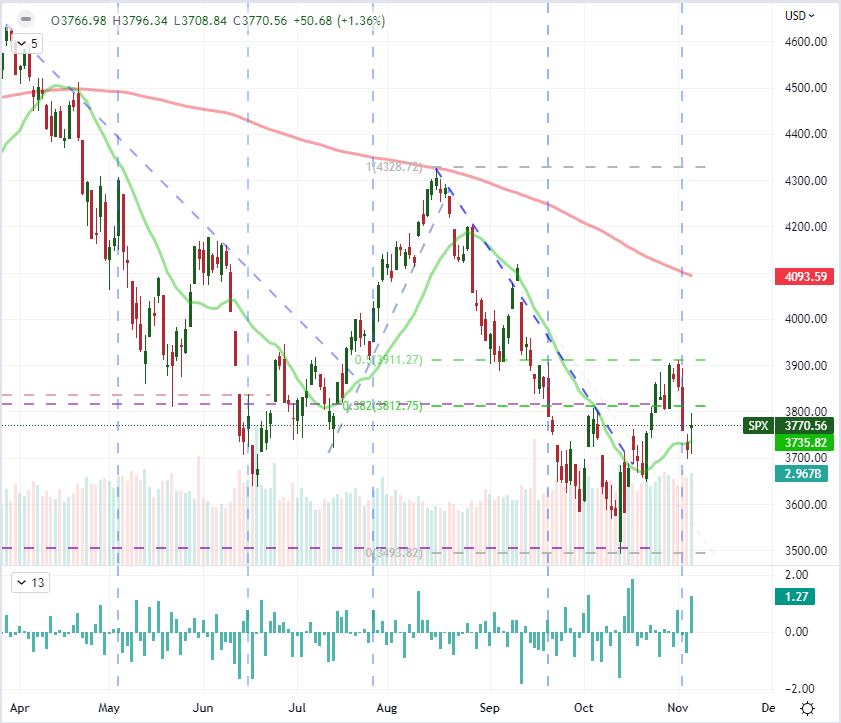 While the benchmark S&P 500 is essentially chopping in a range established over the past weeks between the broader bear trend of 2022 and the ever-persistent pressure of speculative hope, the internal dynamics of risk appetite continue to erode. I believe it is important to look at sentiment through both breadth and depth. Looking for sentiment through a wider picture; global indices seemed to firm up relative to the S&P 500 through Friday while emerging market, junk bonds and even carry trade firmed. That is a very tentative jog higher and it comes notably with very limited fundamental backdrop for the larger market participants to draw from, but the anticipation will be building with the additional seasonal expectations around the 45th week of the year and November overall. Meanwhile, I continue to monitor the falling out of favor of the benchmarks treated as the torchbearers for ‘risk trends’. Beyond the S&P 500 (and its many derivatives), the demand for top market cap stocks (which happen to be the tech giants in the FAANG grouping) has stood as a proxy for risk on and risk off. That is a problem considering the Nasdaq 100 / Dow ratio continued its collapse this past week. 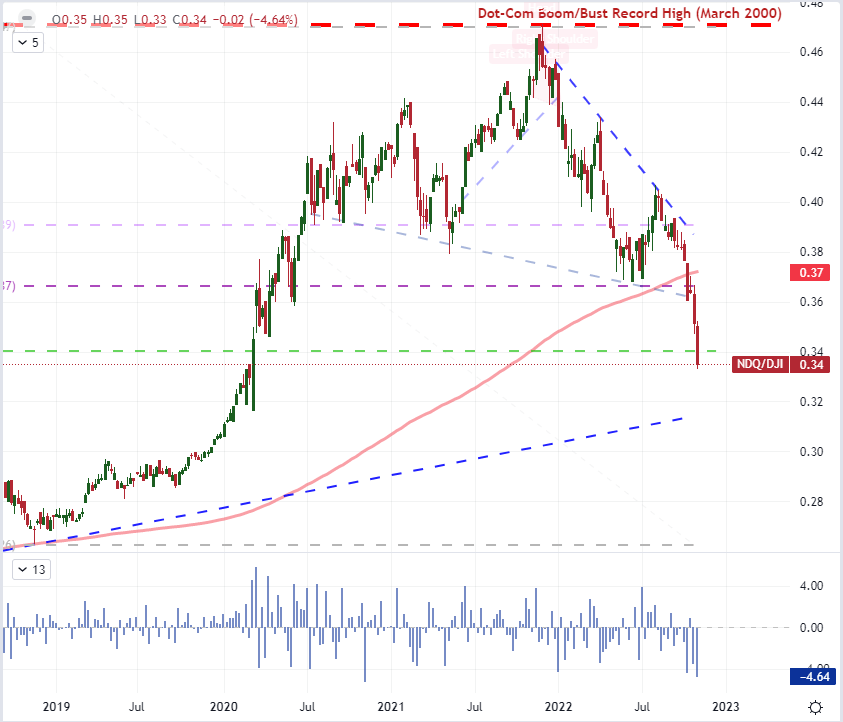 Another point of concern of mine is the seeming utter lack of effort among market participants to hedge against systemic threats like recession risks, financial crises or simply a strong reaction to the next major event (eg the US CPI on Thursday). In fact, with this past week’s underlying market volatility around the FOMC rate decision, the VIX volatility index continued its slide to account for a more than 20 percent retreat in the span of the last 20 trading days, equivalent to one trading month. We have yet to see anything that could be reasonably be construed as capitulation – something I would consider akin to a surge for or above the 50 threshold. Thus far, it has all been remarkably orderly despite the lows in the underlying. This situation alone I could perhaps suppress any serious concern around, if not for the extraordinary readings from the volatility of volatility index (VVIX) pushing a three-and-a-half year low while the SKEW tail risk measure stands at record lows.

Chart of the VIX, VVIX and SKEW Volatility Indices (Weekly) 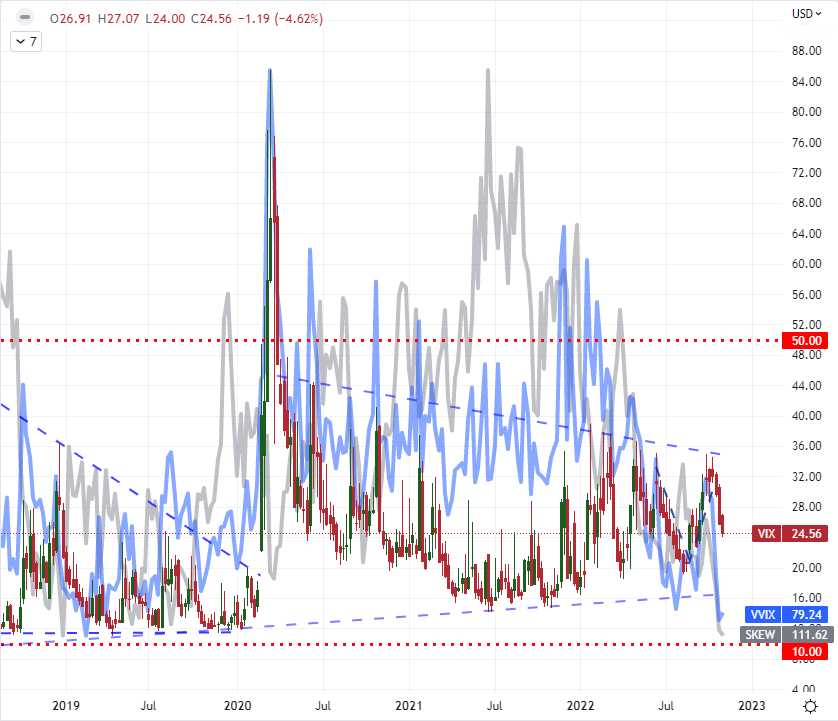 This past Friday’s volatility was extraordinary for a number of different reasons and markets. One such surprise came from the US Dollar. On the final day of the trading week, the DXY Dollar Index registered a -1.9 percent tumble – the worst single-day loss since December 3rd, 2015 and before that March 18th, 2009. Seven years ago, the spark for the index was the smaller than expected easing update from the ECB, leveraging the Dollar’s largest counterpart higher temporarily. With the March 2009 slump, the catalyst was an explicit 75 basis point rate cut from the Fed. I wouldn’t say anything of that same magnitude was on the radar through the end of the past week. NFPs was better than expected and thereby supports the fight against inflation, but Fed speak did remind that the policy path was moving away from large, front-loaded hikes and towards a longer path to a higher terminal rate. When it comes to the US Dollar, I consider three major factors to be a boon to the currency: its relative safe haven status, a top rate forecast through the medium term and a relatively steadfast economic forecast compared to the likes of the Eurozone or UK. That said, the run will eventually come to an end given enough time and circumstance.

Get Your Free USD Forecast 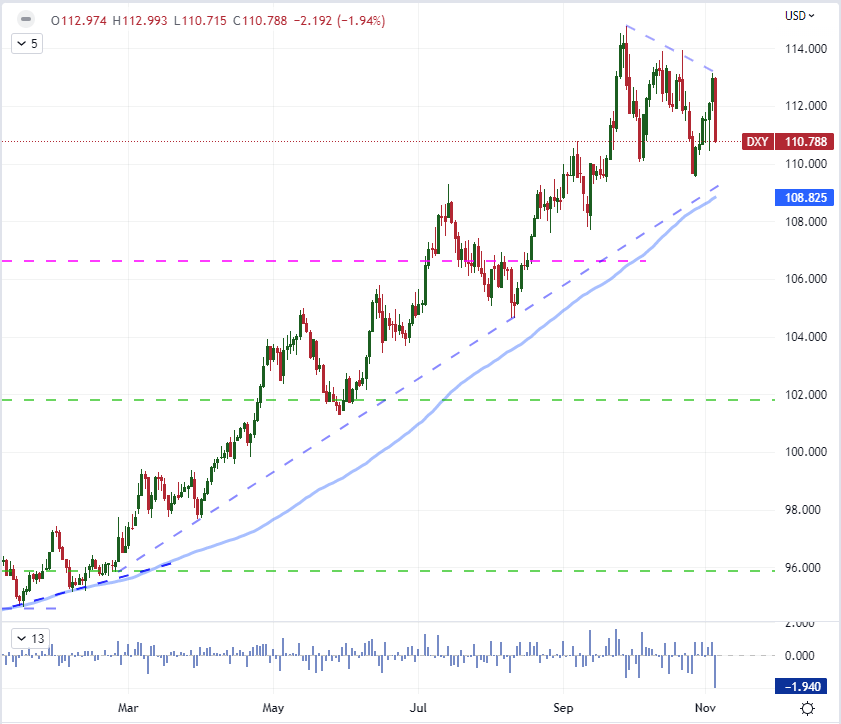 For now, the DXY has been running 362 trading days above its 100-day SMA to support the bearish designation, the longest such run in its half century record. There is still some ways to go before the spot market makes a serious run on its higher trending moving average support. That said, any more dramatic struggles similar to what we have witnessed this past week could push us beyond the threshold fairly quickly. That said, further technical escalation behind a reversal is best served with a tangible fundamental motivation. Should one of the aforementioned levers for the currency break, then I could entertain the probability of such a reversal. Otherwise such expectations will be fighting against well-established themes. 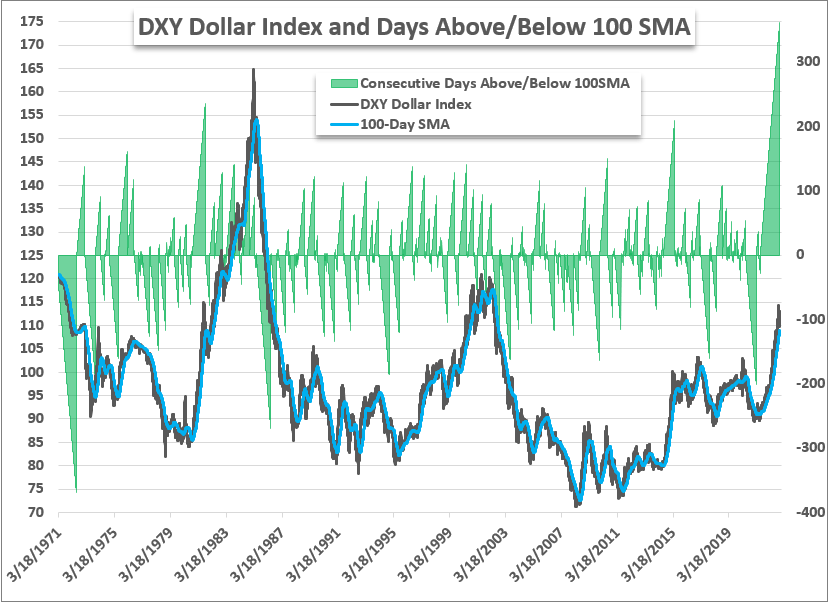 For event risk that has a chance of upending the willful markets, I consider the US CPI on Thursday and University of Michigan consumer sentiment survey on Friday top listings for the US markets and currency. There is a gauge of Fed commitment and a barometer of recession proximity in this combo that should be monitored. Yet, as important as those two measures may be, the evenly distributed Fed rhetoric through the week may prove more productive for market activity. Outside of the Dollar and US, monetary policy interest has a few more sparks in inflation data from the UK, China and Australia. I will be more interested in the foreign exchange reserves report from Japan and China on Monday given the intervention efforts the countries’ respective monetary policy authorities have raised recently. Meanwhile, for global economic health checks, the UofM takes a back seat to the pointedness of the Japanese Eco Watchers survey, UK 3Q GDP and EU Commissions growth forecast. The question is whether there is further surprise in these figures and whether the market will extrapolate as broadly from their individual performance relative to the globe. 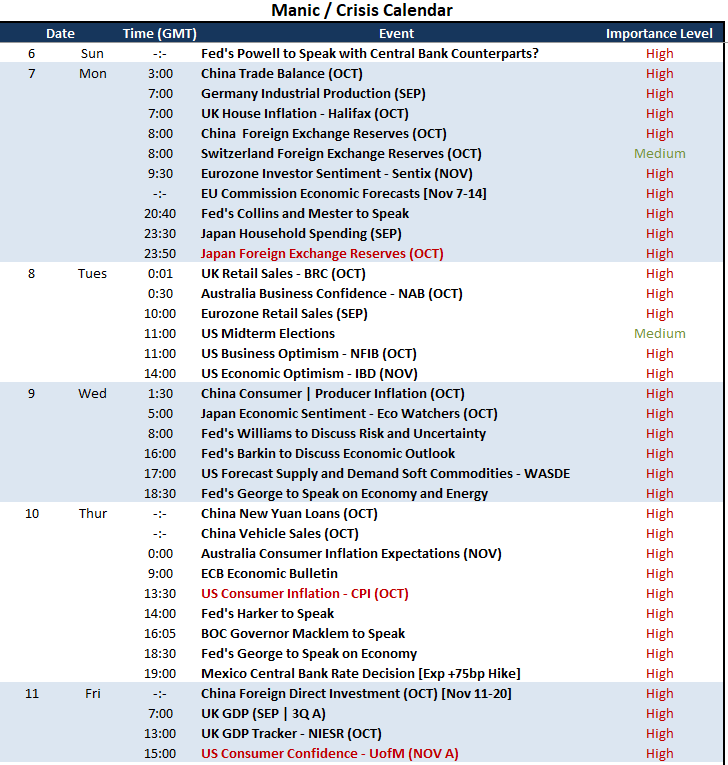 Receive timely and compelling market commentary from the DailyFX team


Read More: US Dollar’s Suffers Biggest Drop 7 Years, Is That the Start of Something?

How to avoid conflict over money as you head into retirement