On Wednesday, the Fed increased the monetary policy rate by 75 basis points to a range of 3.75-4% (Chart 1). The hike itself was expected, what captured headlines was the Fed’s pledge to “take into account the cumulative tightening of monetary policy, the lags with which monetary policy affects economic activity and inflation, and economic and financial developments.” In translation, the Fed plans to take a more measured approach to rate hikes going forward and opens the door to a slower pace of tightening. This sent bond and stock markets higher. 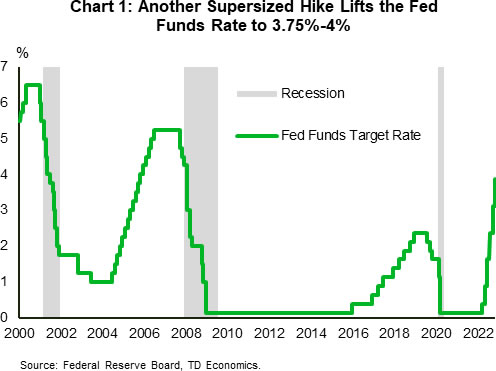 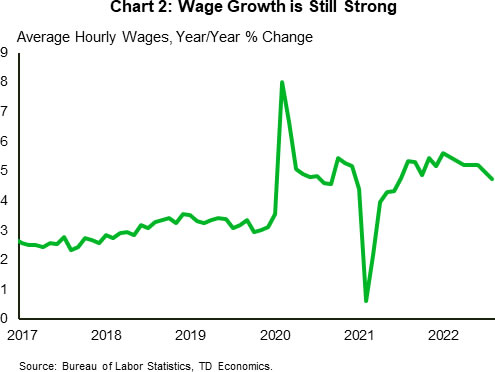 Thirty minutes later, Chair Powell poured cold water on those animal spirits by clarifying that despite a potentially slower pace of hiking, the terminal policy rate is likely higher than what FOMC members expected in September. He pointed out that the labor market is very tight, and that consumers still have a mountain of excess savings to keep demand healthy. Therefore, further tightening is likely going to be required to rein in inflation. He further emphasized that it is “very premature” to consider pausing rate hikes, which soured market sentiment, pushing equity prices 3.5% lower relative to last week.

Despite Powell emphasizing strength in demand, leading business indicators – the ISM purchasing managers indexes – weakened in October. While the headline manufacturing index just managed to stay expansionary, the new orders and new export orders indexes continued contracting for the second and third straight month, respectively. Services activity also slowed, with demand factors expansion now clearly on the downward trend. This means that the cumulative impact of rate hikes might be catching up to consumers. However, more concerning to the Fed is that following five straight months of decline, the prices paid component of the services index suddenly accelerated. This suggests that the largest sector of the economy is still facing faster and more widespread price increases.

October’s jobs report provided little progress on the Fed’s mission to bring the labor market back into balance. The economy added 261k new jobs, above market expectations for a larger slow down. Meanwhile, the unemployment rate rose by two tenths of a percentage point to 3.7% in the household survey, which showed job losses of 328k. While that is an increase, 3.7% is still a very low level historically. The tight labor market showed up in average hourly earnings growth, which eased only slightly to a still very healthy 4.7% year-on-year (Chart 2).

With the Fed laser focused on the bringing down inflation, it will take much more of a slowdown to be convinced that pressures from the labor market are moderating. For now, erring on the hawkish side remains the Fed’s best option. Looking ahead to next week, the CPI report on Thursday may provide some good news with consensus hoping for a slight moderation in price gains. Markets will also be watching the mid-term elections with recent polls pointing to a Republican majority in Congress, resulting in a divided government. While a divided government is historically positive for risk assets, it could result in more fiscal restraint, which would help the Fed at the margin in reigning in inflation.

The job market surprised to the upside in October. Impressive job growth on the month recouped all of the losses between May and September. With a tight labour market and persistently strong wage growth it’s no surprise the federal government is wary of providing additional inflationary pressure to the economy. Indeed, the reticence to provide more fiscal stimulus was evident when it chose to focus its Fall Economic Statement (FES) on supports for low-income Canadians and clarifying the financing of existing commitment rather than net-new initiatives.

Canada’s tight labour market continued in October. Employment gains of 108k erased the losses from the previous five months (Chart 1). The details of the report were solid too. Private sector hiring ticked up (+78k) for the first time since March and all of this month’s employment gains were concentrated in full-time work (+119k). The labour force participation rate also moved higher (+0.2 percentage points to 64.9%) and has reached its highest level since June. The supply of new workers came almost entirely from labour force growth (+110k), as the number of unemployed people stayed roughly constant. Roughly equal growth in the labour force and employment meant that the unemployment rate (5.2%) remained unchanged. 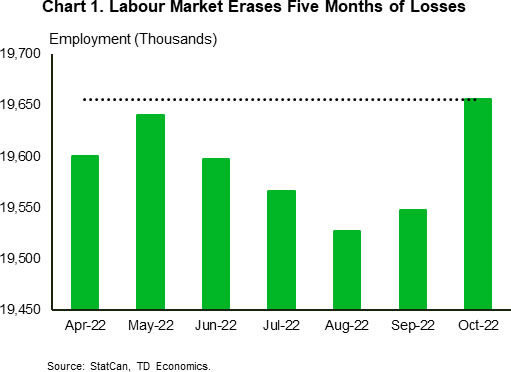 The labour market remains drum-tight despite the 5.2% unemployment rate being marginally higher than the record lows reached last summer. With new workers relatively scarce, average hourly earnings grew 5.6% year-on-year (y/y, Chart 2). Interestingly, today’s report addressed where exactly some of the wage gains are happening. Of workers who had been with their employer at least one year, nearly two-thirds (64.3%) in the top 25% of wage earners received a raise, while only half of those (50.1%) in the bottom 25% got a pay boost. As inflation is running at 6.9% y/y, this means those at the bottom end of the income spectrum are seeing some of the steepest erosion in real wages (and thus living standards). 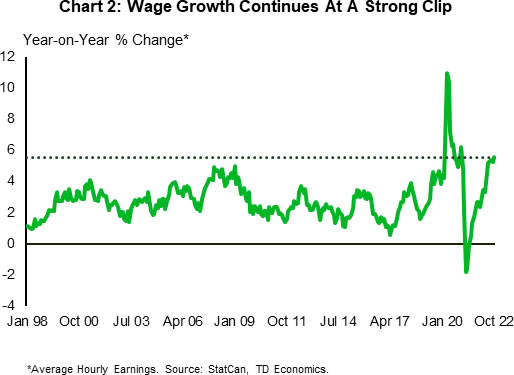 It should be no surprise then that the new spending announced Thursday’s FES focused on income supports for lowest earners. Of the announced $22.1 billion, the main initiatives were $4 billion in advances for the Canada Workers Benefit and $2.8 billion in student debt relief.

The emphasis of the FES was on clarifying funding for previously announced initiatives. On that note, the Canada Growth Fund will look to make its first investments in early 2023, while the investment tax credit for clean technologies is now being estimated to cost $6.7 billion over five years. On the revenues side, a 2% tax on corporate share buybacks and a global minimum corporate tax that were also announced.

The key takeaway from this week is that the Federal government is wary of additional fiscal stimulus, and for good reason as the labour market remains tight. So, the FES included minimal new spending (to not offset the BoC’s efforts to tame inflation) and revenues are going to be used to reduce the nation’s debt burden.

Can Jake, 57, and Bonnie, 52, both retire in three years and still help their teenage children pay

Rupee to trade firmly on dollar’s matching demand and supply

Bullish Momentum in Gold Continues, Ending the Week Close to $1,800

British Pound (GBP) Outlook – GBP/USD Driven Higher by the US Dollar, Where Next?