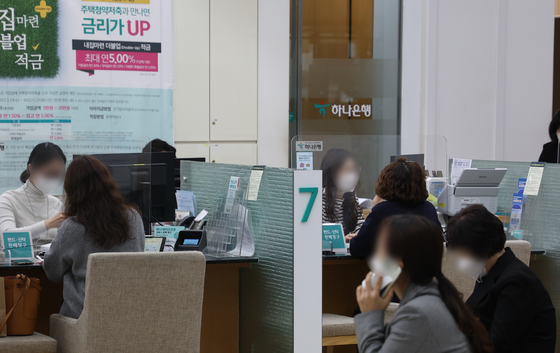 People talk to bank tellers at a Hana Bank branch in central Seoul on Oct. 31. [YONHAP]


As inflation and interest rates have soared, some people are forced to take second jobs to pay their debt.

A 34-year-old office worker living in Yongin, Gyeonggi, has been working as a driver on weekends for three months, even though he works for one of the biggest companies in the country. His monthly salary after taxes is 4 million won ($2,820). In terms of annual salary, this is about 60 million won, which is higher than the average annual salary of workers in Korea.

He had been saving about 500,000 won a month just a year ago, when he and his wife spent about 2 million won a month on living expenses, including groceries and eating out. After paying off his mortgage of 1.2 million won – 400,000 won in principal and 800,000 as interest – which he took out three years ago, about 800,000 won remained.

But things changed dramatically. Interest costs doubled and expenses skyrocketed as prices of groceries and eating out all rose. The steep inflation put pressure on the family. In just a year, the interest he had to pay increased by about 600,000 won, and food expenses increased by about 200,000 won.

Even after the family tightened their spending and cut costs for eating out and clothing, they were still short by more than 500,000 won each month. 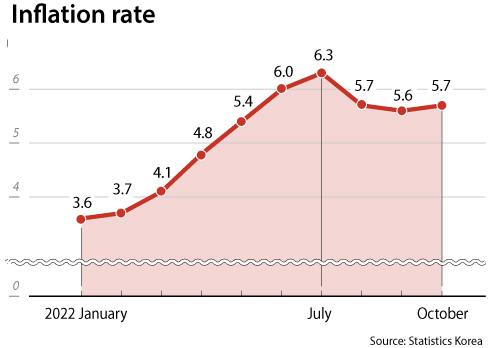 People with debt are left increasingly worried as rates rise unabated. Concerns are deep for those who bought a house with loans of hundreds of millions of won when interest rates were low. As the United States Federal Reserve made an unprecedented decision to raise interest rates by 0.75 percentage points for the fourth consecutive time on Nov. 2, worries were heightened further.

The Bank of Korea is expected to raise its base interest rate at the Monetary Policy Board on Nov. 24 in line with the Fed’s decision. Currently, Korea’s base rate is 3 percent. The benchmark rate in the United States is in a range of 3.75 and 4.00 percent. 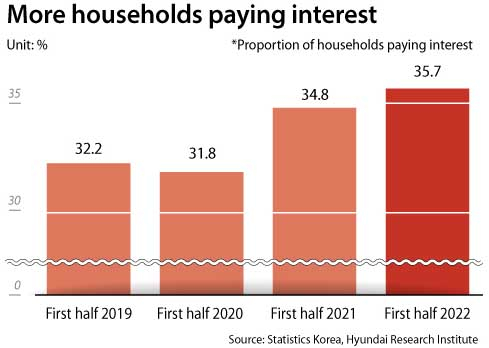 This is due to the fact that the Cost of Funds Index (Cofix), which is the reference interest rate for variable mortgages, has risen to 3.4 percent, the highest level in a decade. The interest rate on five-year bank bonds, which is used as the standard for interest rates on fixed-type mortgages, also doubled in the past year, rising to 5.126 per annum.

The number of households who have to pay interest on their loans is steadily increasing, while the propensity to consume has fallen more for households with debt. Real consumer spending increased for those with debt and fell for those without debt.

Inflation remains above the 5 percent level after peaking at 6.3 percent in July.

“The possibility of consumption contraction is increasing due to the weakening of household purchasing power and spending sentiment,” said Shin Jee-young, senior researcher at the Hyundai Research Institute.

Emerging-Market Debt Is Sliding Into Distress. Just Look at Ghana

Here’s Why FirstEnergy (NYSE:FE) Is Weighed Down By Its Debt Load

Munic (EPA:ALMUN) Takes On Some Risk With Its Use Of Debt

Falco Announces Extension of its Senior Debts and Related