Help! My pension fund has plummeted just as I reach retirement age


I am very disappointed with the performance of my pension fund which I would like to bring to your attention in the hope that you could give me some suggestions as to what action I can take to recover some of my losses.

I am 66 years of age and reached my retirement age in September.

Earlier in my career I contributed to a defined contribution pension scheme. When I stopped contributing as a result of moving to a new job in 2014, the value of the fund was £22,507.

In early 2021 I advised the scheme that I wished to defer taking my pension until my 67th birthday in 2023. Pension dilemma: I am 66 and my fund has plunged, wiping out almost all gains over the past eight years

Part of the reason for opting for this pension was that in the six years preceding my retirement date, my investments were supposed to be moved into less risky areas to protect the value of the fund and to provide more certainty regarding the value of my pension as I approached retirement.

Apparently, this is referred to as the glidepath to retirement.

I have spoken to the pension scheme on a number of occasions but I have been so disappointed with their response times (despite promising to get back to me with answers two people have not replied) I have now raised a formal complaint.

I have rearranged some of my finances and have deferred taking my pension until my 70th birthday in 2026 in the hope that the fund may recover some of its losses.

I did consider drawing down the fund but decided against this as I thought I would only be crystallising my losses. Do you have any other suggestions as to what I can do?

Steve Webb replies: We have heard from a large number of This is Money readers who are angry or simply confused about what has happened to their pension fund this year.

I completely understand how devastating this has been for many people.

In this column I will try to explain a bit more about what has been going on, though I’m afraid there are few easy answers to put things right.

Steve Webb: Find out how to ask the former Pensions Minister a question about your retirement savings in the box below

Your question relates primarily to investing in the run-up to retirement. In this case, the right approach depends on what you plan to do with your money at retirement.

In the past, and particularly before the introduction of ‘pension freedoms’ in 2015, most people used their ‘pot of money’ pension to buy an annuity, which provides a guaranteed income for the rest of your life.

If you were planning to buy an annuity it was common for pension providers to gradually change the investment mix in your pension as you got nearer to retirement, in a process known as ‘lifestyling’.

This involved switching to investments more like those which an annuity provider would use – typically Government bonds or similar.

The point about this wasn’t to take risk off the table completely, but was to match what was happening to annuities.

For example, if you had been fully invested in Government bonds a year ago, although the value of your pot would have gone down sharply, the annuity rate you could buy with that pot would have gone up sharply, and overall you may not have lost out in terms of your expected income in retirement.

In fact, annuity rates are at levels not seen for over a decade.

The problem has come when people who are not planning to buy an annuity have been on a ‘glidepath’, which involved switching out of higher return/higher risk assets such as shares into gilts and other forms of bonds.

The intention is to make your pot size more predictable as you reach retirement, but in your case it has not turned out like that. It is disappointing that your provider did not check your intentions with you when you spoke to them in early 2021.

If your pension provider had given you a proper answer, they might have pointed out that the strategy they were using was more appropriate for investors planning to purchase an annuity.

They could have argued that investing in Government bonds has actually been a relatively stable way of investing for many years.

Evidence for this claim comes in the chart below which shows the Bank of England’s ‘base rate’ of interest in the decade after the global financial crash of 2008. 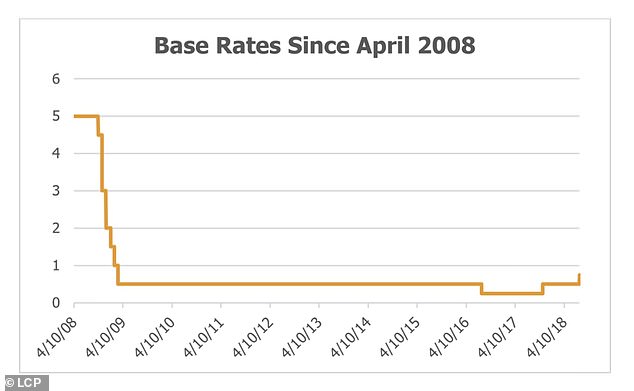 As you will see, interest rates were slashed in a bid to stimulate the world economy in 2008/09 but after that period were incredibly stable.

For the whole of that period, investing in Government bonds would have seemed a low risk (if low return) way of allocating part of your pension fund.

Unfortunately in the last year your investments have been hit by two once-in-a-generation ‘black swan’ events:

– A war in Europe, as the invasion by Russia of Ukraine contributed to falls in stock markets and a rise in global inflation;

Many readers have said in their questions that they feel that ‘too much’ risk was being taken with their investments.

If this means that less money should have been invested on the stock market, then this would indeed have meant you would have had smaller losses this year.

But, as you say in your question, for several years from 2014 to 2021 your investment enjoyed steady growth year on year and this was almost certainly down to being invested in the stock market.

You could have taken less investment risk and avoided the downside risk, but you would also have missed out on years of investment growth.

Similarly with Government bonds, for years this seemed a relatively safe way of investing, and few foresaw these events.

It is tempting to think that the answer to all of this is to get out of markets altogether and put the money in a cash account. But with high inflation and relatively low savings rates, the only thing this does is guarantee you a real terms loss year after year.

As you say, if you take your money out now you simply ‘lock in’ the losses you have suffered and miss out on the potential for a recovery.

Indeed, anyone who cashed out a few weeks ago would have missed out on the modest recovery which has happened since then.

Where your pot falls substantially and you are close to retirement, your options are limited.

While I do not know your individual circumstances, there is much to be said for putting off cashing out your pension (as you have done) and instead give it several years to recover.

For those who are able to work a bit longer, this also allows them to rebuild their retirement finances.

It is also possible to defer taking a state pension, which leads to an increased income in retirement of 5.8 per cent for each year of deferral.

Another option would be to consider whether using some of your pot to secure an annuity might now be more attractive given the sharp recent improvement in rates.

Whilst recent turbulence in both shares and bonds has been unexpected, this whole experience is a reminder to all investors to make sure they know how their money is invested.

In particular, they need to ensure that the investment approach being taken is a good match to their attitude to risk (taking no more risk than the saver is comfortable with), their capacity for loss (not running the risk that a downturn could leave them short of money for essentials) and importantly, aligns with how they plan to access their money.

He is ready to answer your questions, whether you are still saving, in the process of stopping work, or juggling your finances in retirement.

Steve left the Department of Work and Pensions after the May 2015 election. He is now a partner at actuary and consulting firm Lane Clark & Peacock.

If you would like to ask Steve a question about pensions, please email him at pensionquestions@thisismoney.co.uk.

Steve will do his best to reply to your message in a forthcoming column, but he won’t be able to answer everyone or correspond privately with readers. Nothing in his replies constitutes regulated financial advice. Published questions are sometimes edited for brevity or other reasons.

Please include a daytime contact number with your message – this will be kept confidential and not used for marketing purposes.

If Steve is unable to answer your question, you can also contact MoneyHelper, a Government-backed organisation which gives free assistance on pensions to the public. It can be found here and its number is 0800 011 3797.

Some links in this article may be affiliate links. If you click on them we may earn a small commission. That helps us fund This Is Money, and keep it free to use. We do not write articles to promote products. We do not allow any commercial relationship to affect our editorial independence.

Are You Helping Clients Avoid a Trillion-Dollar ERC Tax Scheme?

If You Delay Retirement, You Should Also Delay This

Pension plan should include young, self-employed

The Best Credit Cards for Seniors and Retirees In 2022

Best UK places to retire in 2022: Suffolk named as ‘ideal’ location for…

how calculators can measure changes

Labour unions kick against any ‘haircut’ on pension funds of workers