Tempus Resources encouraged by visible gold and wide zones at No.9 Vein of Elizabeth Gold Project 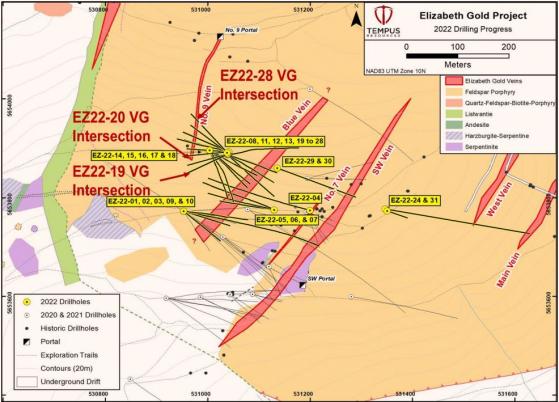 Tempus Resources encouraged by visible gold and wide zones at No.9 Vein of Elizabeth Gold Project

Tempus Resources Ltd (ASX:TMR, TSX-V:TMRR) has identified visible in three of nine holes drilled at the No.9 Vein of the Elizabeth Gold Project in British Columbia, Canada, improving the company’s confidence in this new target following the broad zones of quartz-bound gold found previously.

The company is particularly encouraged by a 2-metre section of drill core in EZ-22-28, which demonstrated several zones of quartz veining with visible gold.

“We now have nine drill-holes into the No.9 Vein located 120 metres northwest of the Blue Vein,” Tempus Resources president and CEO Jason Bahnsen said.

“This is the third drill hole reporting visible gold in the core. We are encouraged by the wide zones of mineralisation we are seeing in the previously unexplored No.9 Vein. Assays are pending for all nine holes.”

EZ-22-28 intersected the No.9 Vein about 100 metres to the north of the previously announced No.9 Vein drill holes EZ-22-19 and EZ-22-20 which contained wide zones of quartz with visible gold.

The hole intersected quartz veining of around 2 metres from 117.50 metres depth that contained multiple specks of visible gold.

No.9 Vein is a previously mapped vein about 120 metres northwest of Blue Vein. Some limited exploration had been performed on No.9 Vein in the 1940s and 1950s.

Shakur Stevenson: I’m Definitely Proving I’m A Bigger Star Than Everybody Give Me Credit For

Greatland Gold expects to deliver on estimate on milestone at Havieron

Returns could be pot of gold at end of 3PL rainbow