Proposals by the European Commission (EC) to tame soaring energy costs don’t alter the role natural gas plays on the continent and may do little to rein in the volatility that has ruled the market this year. 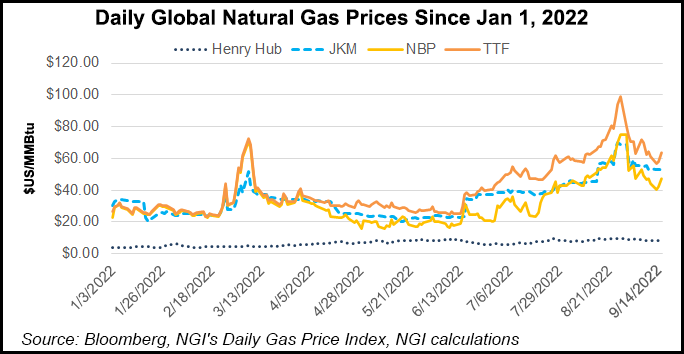 The EC proposed revenue caps on some power producers, a windfall tax on the excess profits of fossil fuel companies and targets to cut electricity demand to help reduce consumer energy bills. Excess profits and revenues would be redirected to consumers, but the European Union (EU) executive branch avoided proposing price caps for imported natural gas.

“I don’t think the measures proposed by the Commission will help reduce gas prices,” said Rystad Energy’s Carlos Torres-Diaz, head of gas and power markets. “I think the proposed solution is more reasonable than trying to cap gas prices as the latter could have resulted in a further drop in gas supplies and hence a tighter market.”

He told NGI the proposals “will hardly alter the energy mix meaning that gas will continue to be needed in the power sector to meet demand.”

Energy Aspects’ James Waddell, head of European gas, agreed. Capping gas prices is unlikely to be implemented, according to the firm. Waddell said caps could also result in lowering EU supply as sellers would redirect volumes for better prices in other markets. That would help to lift prices at the benchmark Title Transfer Facility (TTF).

The Commission said it would “deepen its discussion with member states about the best ways to reduce gas prices” in the weeks ahead. During an address before the European Parliament last week, EC President Ursula von der Leyen recognized the emerging disconnect between TTF, a pipeline benchmark, and LNG arriving by sea at the continent’s ports.

“Today, our gas market has changed dramatically from pipeline mainly to increasing amounts of liquefied natural gas,” she said. “But the benchmark used in the gas market – the TTF – has not adapted. This is why the Commission will work on establishing a more representative benchmark.”

A new index, she added, would cover LNG deliveries at regasification terminals and provide another reference price for “the supply and demand dynamics of international gas markets.”

Indeed, the LNG that has flooded the continent this year is less expensive than the gas traded on the continent’s pipeline hubs.

“Historically the TTF European gas pipeline price was regarded as a sufficient proxy for delivered LNG into Northwest Europe, with the differential between these prices being a small spread, often matching the costs to regasify and send the gas into the grid,” Spark CEO Tim Mendelssohn told NGI. “This situation has changed dramatically since the energy crisis with a large dislocation between NWE DES LNG and the TTF emerging.”

The wide discount is being driven by the large volumes of LNG arriving in Europe. Most of the cargoes are coming from the United States. U.S. netbacks have continued to demonstrate how profitable it is to send spot cargoes to Europe rather than Asia.

Mendelssohn added that a lack of European import capacity has driven the spread as well. He said firms that have secured regasification slots can receive discounted LNG from sellers without booked import capacity.

Henry Hub is the main pricing point for U.S. LNG, which has accounted for the bulk of global supply growth in recent years. Tracking moves in the daily domestic spot market can portend changes in the near-month futures contract and yield signals as the global gas market becomes more interconnected.

Volatility is likely to continue defining the European market this winter. TTF has tumbled by 40% in recent weeks from highs of more than $100 to around $60 this week.

Storage inventories are at 85.6% of capacity, ahead of the 80% target the EU set for Nov. 1. Soaring energy prices have also cut into power demand across the European economy. However, Waddell told NGI that revenue and profit caps that could be set aside for consumers would insulate power demand from reacting to high prices.

Supply concerns continue to loom over the continent as well. Nord Stream 1 remains offline until an oil leak can be repaired, something Russian officials claim cannot be properly done until the West lifts sanctions for the war in Ukraine.

For now, the market appears to be weighing the potential impact of the Commission’s proposals as they are not guaranteed until member states sign off. TTF has been mixed over the last week and has traded near $60.

Britain’s lurch to Reaganomics gets thumbs down from markets

What is the Cost of Europe’s Energy Crisis?

From the Fed to Europe’s currency crisis, here’s what’s behind this…