Etsy isn’t an anomaly — I could easily create a list of high-quality companies where shares are trading 70%, 80%, and even 90% off of their highs. And my observation is that investors are getting discouraged as a result. In despair, they’re turning away from picking individual stocks and simply investing in index funds instead.

Don’t get me wrong: Index funds can be a great approach to long-term wealth creation. And they can make up an entire or just part of an investing plan. However, I emphatically believe you can beat the average market return by picking stocks. And if you disagree with me now, I think a quote from Etsy’s CEO will totally change your perspective.

Losers are getting thrown out

Silverman reminisced about the dot-com era at the Evercore ISI Technology Conference on Sept. 7 and dropped this golden nugget of wisdom: “I’m old enough to have been running a business in 2000 when every Internet company was getting infinite amounts of money. And actually, 2002, 2003, 2004, 2005 were some of the best times to be building Internet companies.”

Silverman is saying that funding for internet businesses came easy during what’s now known as the dot-com bubble. However, when the bubble popped in 2000, funding evaporated. But Silverman says the best time to build was after the free money vanished.

When debt is cheap, companies with bad businesses, poor management, and dubious opportunities are able to fund their operations and grow just like good companies. But once the music stops, the bad investments are finally exposed for what they are.

For this reason, Silverman says the best time to build is after the funding is gone. His comments were specifically in the context of e-commerce. And history supports his insight.

Two dot-com survivors, Amazon and eBay, saw their revenue continue to skyrocket before and after the crash, whereas many weak e-commerce players began to shrivel as their funding plugs were pulled. A third survivor is Booking Holdings (then Priceline.com). And while its revenue took a step back for several years, it eventually returned to growth. 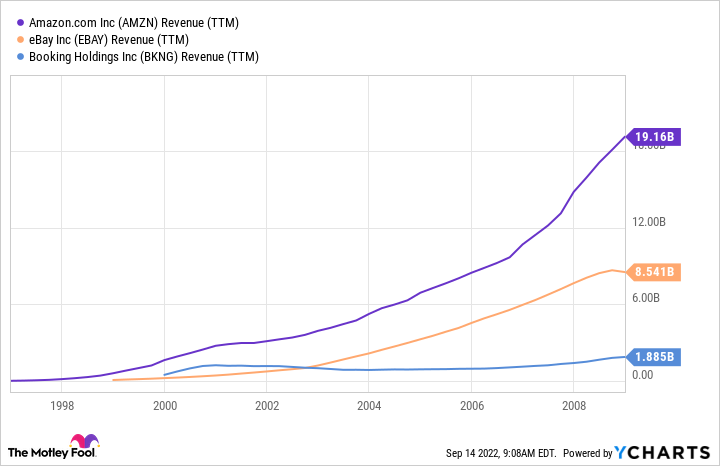 Time to buy the winners

I’m not here to tell you stocks are necessarily undervalued right now or that your holdings will quickly recapture their all-time highs. I’m here to say that buying and holding individual stocks in good companies is a particularly compelling strategy for beating the market’s average returns from here.

As you likely know, the Federal Reserve has been raising interest rates to combat inflation, as reflected in the 10-year Treasury rates. 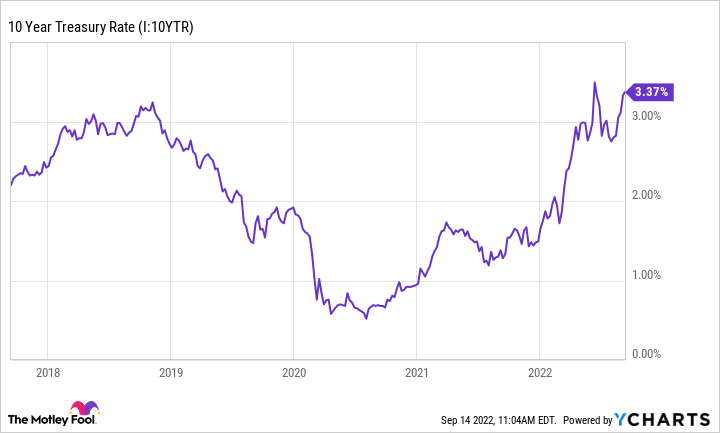 The impact this has on businesses — both public and private — is real. Snap CEO Evan Spiegel recently said it perfectly in a memo to employees: “Today, the cost of capital has increased so dramatically that our business will be valued based on our ability to generate profits. We must adapt our strategy accordingly.” The takeaway here is that Snap’s strategy change is directly correlated to the ongoing change in the cost of capital.

Some companies simply aren’t ready to drastically alter their strategies and generate profits. Those companies will be weakened or weeded out entirely, leaving only the best and strongest companies to gobble up market share from here. As an investor, if you can identify a handful of those companies now, I believe you’ll do quite well if you buy their stocks today.

Coming full circle back to Etsy, it’s positioned to do well in 2022 and beyond. It does have a net debt position with nearly $2.3 billion in long-term debt compared with nearly $1 billion in cash, cash equivalents, and long-term investments. However, its operations generate cash. Through the first half of 2022, it generated $185 million in cash from operating activities. In other words, Etsy doesn’t need to worry about the cost of capital going up because it doesn’t need capital from outside sources.

Smaller, privately held Etsy competitors are not in the same position. At the Evercore conference, Silverman also said, “I think we’re going to see a reckoning.”

This benefits a strong business like Etsy. But the broader takeaway is not to abandon stock picking while the market is down. Now may actually be one of the best times in years to invest in strong companies for the long haul.


Read More: This Prediction By Etsy’s CEO Will Totally Change Your Perspective on Today’s Stock Market

Nifty week ahead: Markets look oversold but nervous ahead of Fed decision

Governments ‘Must Invest and Regulate to Cut Energy Costs’

Is a beer shortage on tap? Inflation and supply chain pressures on brewers are…

Another Reason to Delay Claiming Social Security as Long as Possible? Taxes

This index is signaling that inflation already peaked and is slowing