Yesterday’s U.S. inflation beat so global markets reverse expectations around a less aggressive Federal Reserve bringing the EUR/USD currency pair all the way back below parity. The previous hawkish meeting by the European Central Bank (ECB) was not enough to deter yesterdays release (and rightly so) with the U.S. economy exhibiting strong fundamentals relative to the eurozone. The divergence between the two economies could be widening as Europe faces the threat of a serious energy crisis as the region heads into the winter months.

Get Your Free EUR Forecast

Today, EC President Ursula von der Leyen addresses the European Union (see economic calendar below) discussing the Russian invasion of Ukraine as well as the impending energy crisis. Thus far (at the time of writing), the EC President has pledged the EU’s financial support for Ukraine to the value of Є100m as well as stating the need to diversify away from Russia as the principal energy supplier.

Industrial production for the eurozone is also expected to come in lower than the June print which could be attributed to higher input costs and lower demand which could reiterate the declining economic backdrop in Europe. The day ends with U.S. PPI (projected higher) and may continue to support a stronger USD. 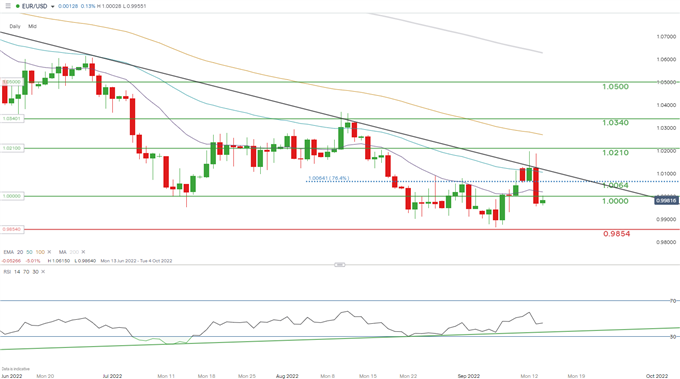 EUR/USD price action has bulls desperately trying to push back above the psychological 1.0000 support zone but with the potential of a bullish USD print via U.S. PPI, the euro remains vulnerable to further downside. The current daily candle exhibits a long upper wick and could point to a weaker euro should we see a candle close in this fashion, bringing the 0.9854 October 2002 swing low into consideration.

Short-term I do see some reprieve for the euro potentially fluctuating around parity, but the longer-term outlook remains heavily skewed towards the greenback.

IGCS shows retail traders are currently LONG on EUR/USD, with 67% of traders currently holding long positions (as of this writing). At DailyFX we typically take a contrarian view to crowd sentiment resulting in a short-term cautious bias.


of clients are net long.

of clients are net short.