It’s become increasingly difficult to estimate how much money Apple’s App Store business makes, as it’s lumped in with other services on Apple’s balance sheet — and because Apple has adjusted its commission structure so it’s no longer a flat 30% across the board, making it difficult to work backward from the public figures Apple does provide to narrow down its numbers. But a new report indicates that overall, the prices consumers are paying to engage with apps listed on the App Store have grown considerably — a suggestion that Apple’s own cut has grown, as well.

And what’s more, this growth is not entirely organic, the report suggests. Rather, it’s more closely linked to Apple’s privacy changes — App Tracking Transparency, or ATT — instead of inflation or the broader macroeconomic factors that have impacted tech companies as of late. 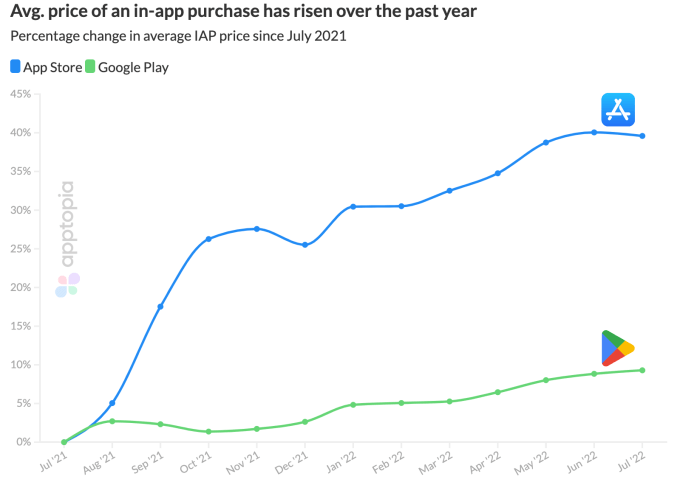 This new data come from app intelligence firm Apptopia, which found that the average price of in-app purchases (IAP) on the App Store has climbed 40% since last year, while Google Play IAP prices only saw a 9% increase during that same time frame. The firm analyzed pricing across both app marketplaces between July 2021 to July 2022 to reach its conclusions.

Apptopia suspects ATT’s 2021 introduction is behind the rising prices for in-app purchases because the increases kick in before inflation began to hit the economy hard in 2022. In other words, it appears that app publishers were adjusting their rates in reaction to the increased effective cost per install (eCPI) that came about after Apple’s ATT made it more costly to acquire new users. To support this conclusion, the report cites data from measurement company Adjust which shows how the growth in eCPI directly correlates with the IAP price increases. 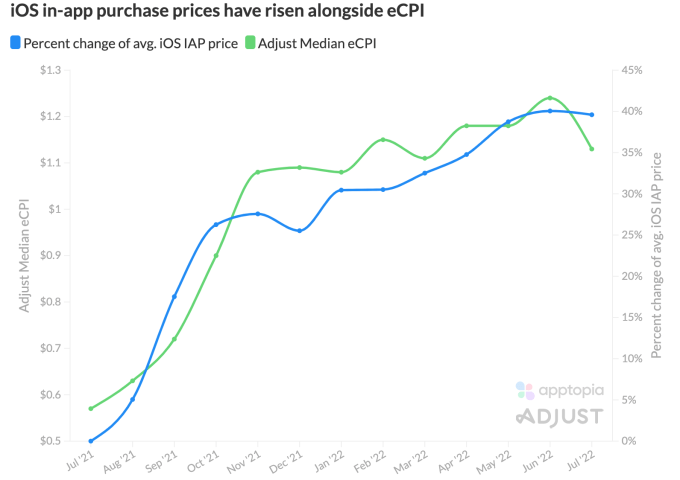 In addition, if the growing prices were more of a reaction to inflation than ATT, then it would go to reason that similar trends would be seen across Google Play — but that’s not the case. While it’s true that Google Play historically pulls in less overall revenue than the App Store through things like paid downloads, in-app purchases and subscriptions, it still hosts a number of apps reliant on in-app purchases to monetize. But Google Play’s average in-app purchase price increase was only in the single digits, compared with Apple’s 40%.

This news follows another recent report which found that ATT had helped boost Apple’s advertising business, as well, allowing it to earn a spot amid the Facebook-Google duopoly.

Apptopia’s new report also broke down how the different types of in-app purchases were impacted by the price changes.

It found that the average pricing of iOS single-purchase in-app purchases grew 36% year-over-year while other in-app purchases, including monthly and annual subscription options, grew only 19%. 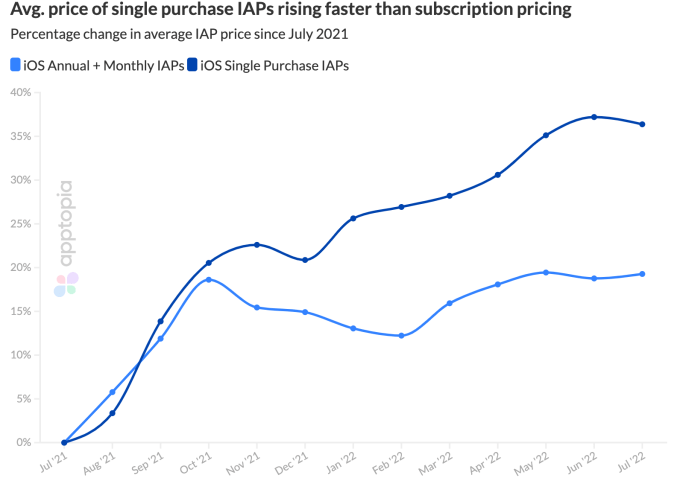 Advancing Along the Returns Journey

Burlington opens a new store in The Woodlands, donates to local school

Essentials Fall 100: Why we think the Cosori Dual Blaze is the best air fryer of fall…

Why E-Commerce Stocks Wayfair, Farfetch, and Global-E Online Were Down Today

Here are all the new Amazon Echo devices announced in 2022

What is the economic impact of cryptocurrencies?

Buy Now As the End of Fed Tightening May Be Near

Credit card interest rates climbing. Here’s how to tackle your…