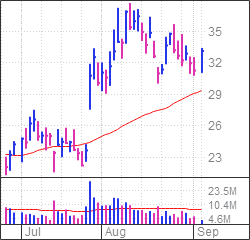 Sunrun (RUN) is the IBD Stock Of The Day, a leading provider of residential solar, storage and energy services. RUN stock is one to watch.


Sunrun has popped above its 200-day moving average and is also finding support at the 10-week line in a pullback move. Shares jumped 6.5% Tuesday afternoon to 33.46.

RUN stock is not actionable at this time and the weak stock market adds to the risk, but it could form a bottoming base in a few weeks.

Founded in 2007 and based in San Francisco, Sunrun claims to be the largest provider of residential solar installation, followed by SunPower (SPWR) and Sunnova (NOVA).

Investors are piling into solar energy issues like RUN stock and other green companies, thanks to the recently passed Inflation Reduction Act. The legislation provides nearly $369 billion to bolster energy development and combat climate change.

On Aug. 3, Sunrun reported second-quarter results that beat Wall Street estimates. It reported revenue of $584.6 million, compared with analyst views of $502 million and up 46% from the year-ago period. It reported an adjusted loss of 6 cents a share, vs. estimates of a 12-cent loss.

During the quarter it installed 246.5 megawatts of solar energy capacity, beating estimates of 240 megawatts.

“Sunrun is in a great position to lead the charge for Americans to achieve a more affordable, independent and resilient clean energy future,” Sunrun Chief Executive Mary Powell said in prepared remarks with the earnings release.

The company sees a large market opportunity. Sunrun says there are about 3.2 million single-family homes that are solar powered in the U.S. It expects that number to reach 14.1 million by 2031.

“The U.S. residential electricity market is over $194 billion per year and ongoing utility spending has resulted in escalating retail rates, increasing our value proposition and expanding our addressable market,” the company said in its earnings release.

Growth drivers include the increasing costs of retail utility rates as well as deteriorating grid reliability. In addition, the costs of solar modules and batteries have declined significantly over the last 10 years and market research predicts that these trends will continue.

It says more than 70% of America’s transmission lines and large power transformers are at least 25 years old, and utilities will need to spend an exorbitant $2.2 trillion on infrastructure upgrades during the next 20 years in order to keep our system up and running. These costs ultimately will be passed to consumers.

Sunrun says it has 724,000 customers and provides solar service in 22 states, including Puerto Rico.

RUN stock ranks No. 11 in the group. Others companies in the sector include SolarEdge Technology (SEDG) SunPower and First Solar (FSLR).

It has a Relative Strength Rating of 83 out of 99, which shows how a stock’s price performance over the last 52 weeks holds up against all the other stocks in IBD’s database. The best-performing stocks often have an RS Rating above 80.

Solar Stocks Get Charged Up On Historic Green Energy Bill

SunPower, IBD Stock Of The Day, Charged Up In Solar Market

Get Full Access To IBD Stock Lists And Ratings

Tesla Deliveries Will Hit A Record; Will It Be Enough Amid Demand Concerns?

AMC Stock Is Hungry for a Big Hit

Can I Leave My Co-op to My Heirs?